During my mast refit, I installed an inner forestay tang plus two backing plates for running backstays. With the mast finally on the boat, it was time to turn my attention to the deck pad-eye and the support it would require below decks. I had already decided to install the pad-eye just behind the windlass, approximately 115cm aft of the headstay (this also determined the position of the tang on the mast, so that the inner forestay would run parallel to the headstay). To counteract the lifting force of the stay, I installed another, exact same pad-eye below decks, in effect sandwiching the deck between the two. This would accept one end of the supporting strut.

(A WORD OF CAUTION: it is important to drill oversized holes, remove as much of the core material (balsa or foam) as possible by using a sharpened Allen key on a drill, taping the holes from below and then injecting epoxy resin from above. When the resin has cured, you drill the holes once again, in the correct size. This "epoxy plug" method protects the surrounding core material form potential water ingress and prevents delamination.)

Finding a secure attachment point for the other end of the supporting strut came next. Many years ago, I had looked into converting the separation between anchor locker and V-berth into a proper bulkhead. However, this would have meant that I would lose access to the underside of all the bow fittings; so, instead, I divided the bulkhead into two parts, epoxied the lower part to the existing tabbing and simply screwed on the upper part. The lower part is made of 25mm plywood and is strong enough to form the basis for the strut support. I also through-bolted this to the tabbing with six 8mm machine bolts.

The final step involved installing a substantial backing plate for the third pad-eye, which I made from a piece of 3mm 316 stainless steel plate, trimmed to size with my angle grinder. Finally, I connected the two pad-eyes with the support strut.

A note on the installation of the inner forestay and the running backstays will follow soon.

Nice tidy job on the install, Nic. I especially like the way you've anchored it to the anchor locker bulkhead tabs. It's very neat and relatively non-intrusive to the V-berth, and the strut appears to be in line with the extension of the inner fore stay, giving it a nice straight pull.
Just a note on drilling holes in the deck: I drill only through the top layer of glass and through the core, clean the upper surface of the inside deck layer, then fill with thickened epoxy and drill the final hole all the way through when it sets up.
Peter http://www.mostlyaboutboats.ca
==================
Victoria, BC, Canada
Albin Ballad Restoration Photo Album
Top

Great suggestion! Of course you need to be light-handed with the drill

I guess if you have a vacuum cleaner with a narrow tip you can remove the debris without drilling through.

Where is your water tank? have you moved it, or just the filler?

And what are the eye bolts for at each side of the foredeck?

Thanks for the insights into your boat. Always interesting.

The water tank is in its original place but I sealed off the inlet when I installed the platform for the twin anchor rollers. Now, I just drag the water hose into the V-berth and fill the tank through the inspection hatch.

I've also replaced some of the original dome-headed toe rail bolts with eye bolts, in places where I want to attach blocks or shackles. The ones on the foredeck are for securing the spinnaker pole in the outboard position when I pole out the genoa (I have similar eye bolts on both stern quarters). Fore and aft lines plus the topping lift "lock" the pole in place so that the genoa can be furled and unfurled without worrying about a swinging pole. (I discovered that tip in Beth Leonard's wonderful book "The Voyager's Handbook".)

Oh neat! We intend to something much like that, Though I am leaning more & more toward a folding double pad eye rather than the Wichard U-bolt I bought for this. I've already replaced a large section of the deck core in that area in preparation. The turnbuckle solution is good, but I'm also thinking about a Dyneema or polyester line thru a block & tackle. A lever-type forestay adjuster would work too.

So you are adding running backs, eh? I think we may skip those, if we can get away with it. The G3 (18 m^2)we intend to fly as a solent, probably on a removable furler, stretched between masthead and foredeck fitting. No need for checkstays on that. The storm jib is only 50sqft & will probably be launched flying (banded) using a Dyneema halyard which doubles as the pole topping lift. That halyard exits the mast level with the spreaders, so the lower aft shrouds will hopefully suffice to keep the mast from pumping. Also acting in our favor will be the mainsheet (headboard even with spreaders in deep-reefed conditions) and the overall size of the mast. Our original Selden is sized for a boat about twice as heavy as the Ballad! Thing is a telephone pole, and I have trouble imagining it flexing much. 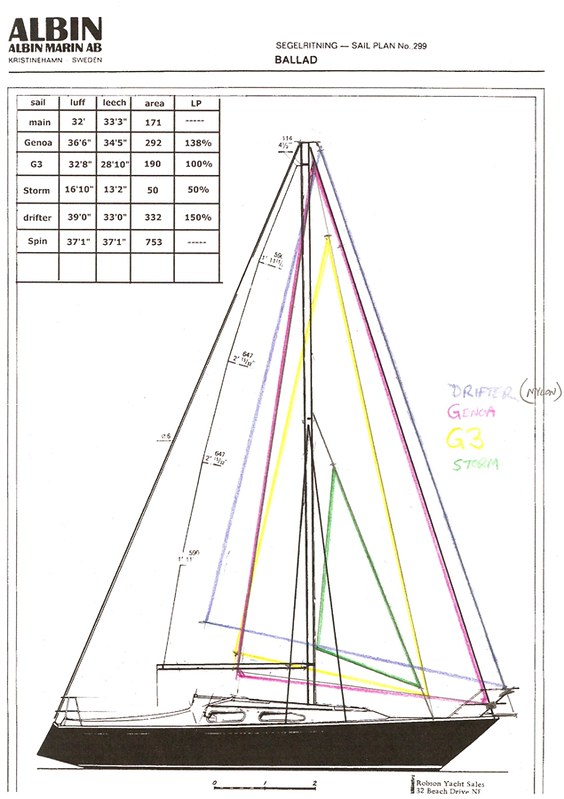 I already had a Solent stay that terminated high up on the mast, about 30cm below the headstay. (The deck fitting is the Wichard watertight U-bolt you see in the first photo, just behind the anchor platform.) This has served me well, although keeping heavy-weather sails closer to the mast is always better, hence my new inner forestay. The check stays do present some problems, particularly in how to tighten them and where to store them when they're not in use. Although I was thinking of wire check stays, I decided on 8mm covered Dyneema on a 2:1 purchase, tightened by the spinnaker winches. Adding dedicated clutches may be a future purchase--after I try out the present system for a couple of seasons and the boat kitty is replenished.

I'm not so sure about setting a storm sail flying; even if it has a wire or Dyneema luff, you just can't get enough tension, even with a block and tackle. Another point about having a proper inner forestay and good check stays is that they lend quite a bit of all-around support to the mast. Whether masts of our vintage need it is another question. Mine is another "telephone pole", from Proctor

All the inner sails on the Ballad were originally intended to be set flying -- which suggests they didn't expect them to be used much! Our 'solent' will actually attach to the same halfway deck eye as the storm jib, so not quite a true solent, more of a masthead staysail. That moves the G3's center of effort back toward the mast. Since the Ballad's mainsail is so very high aspect, reefing it does not shift the CofE forward very far.

I hear you on the storm jib's luff tension; but Code Zeros are regularly flown free with upwind luff tensions >700kg. Would probably use the mast winches to tension the halyard, maybe a 3:1 tackle or Hyfield lever as a deck strop for final tensioning? Our first several years will be spent coastal cruising between bays, and the only really sustained strong daytime winds you get in the Sea of Cortez (outside hurricane season) are Northers, which are predicted days in advance. We should have a chance to play with our storm sail layouts in relative safety before (if) we ever try a passage.
Top

You're right about the Code Zeros. I have an asymmetric on a furler, and I can assure you that you have to crank hard on the winch to tighten the halyard when going upwind and, particularly, when you want to furl it. I've built a special attachment point on the anchor platform for that, with a strut below to counter the tension.

I'm also thinking of attaching the lower end of the Solent stay to the second inner forestay pad eye and try it out--even though it won't be parallel to the headstay, as per your drawing. The sure thing is that this business with the check stays is not cheap. The T-terminals were 45 euros a piece (x2) and the wire or sheathed dyneema is 6 euros per meter (I need approx 22 meters). But since I've already installed the mast fittings I'm just too eager to complete the set up. I guess I'll have to eat and drink less for a few months

Below are a couple of photos of my recut Genoa 3 (Genoa 4 now) on the Solent stay. I've gone sailing with it and it works a treat.

Below are a couple of photos of the storm jib bent on the new inner forestay. The sheets pass inboard of the cap shrouds and outboard of the lowers, for a better sheeting angle. The tack of the sail will be attached a little lower than in the photos. I'm currently having an old Genoa 3 recut so that it can be used with this stay as well.

Return to “Rig and Sails”